For the past three years Porthcothan Beach School has developed and trialled resources for teachers and children to support the themes arising from The Wrecking Season, a film about everything that washes up on Cornish beaches, Cornwall’s place in the Atlantic community and issues of global pollution and conservation.

In the summer of 2013 Porthcothan Beach School are offering beach resources to support coastline projects. These will include a DVD of the film The Wrecking Season, a loan box of strandline booty and a booklet of cross curricular resources linked to the film, including worksheets, investigations and creative ideas.

Also included in the resource will be the opportunity to visit Jane Darke’s house on Porthcothan beach to learn more about the extraordinary collection of artefacts gathered over twenty years of wrecking and to take part in a range of beach workshops run by the artist Andrew Tebbs. 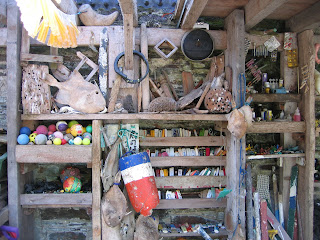 The learning resources have been designed by Jane Darke, an artist and filmmaker, and teacher Rachel Berrington, who is passionate about using the beach as an outside classroom.

To find out more about The Wrecking Season visit  www.janedarke.net

‘This story is about what’s cast up on the shore, who picks it up, what they learn from it and the uses they put it to. It’s a story of extraordinary journeys which have their beginnings from the frozen North all the way down to the Eastern seaboard of the America’s to the deep jungle of the Amazon.’
Nick Darke, The Wrecking Season

Nick Darke was a Cornish playwright and beachcomber who wrote extensively about Cornwall and environmental issues. www.nickdarke.net

Thanks to the Gulf Stream the North coast of Cornwall is one of the best places in the world for receiving ocean flotsam.